Our lives begin to end the day we become silent about things that matter.” – Martin Luther King, Jr.

This is the quote that inspired the title for my book, The Weight of Silence. To stay silent, to say nothing in the face of injustice or suffering, to turn the other way, is to be complicit in them.

To close out 2014, I would like to share the words of a far more powerful writer than myself: Elie Wiesel. His words show even more, the weight of silence. The words are from his Nobel Peace Prize acceptance speech, awarded for his intense, life-altering book Night. This speech was given in Oslo, Norway on December 10, 1986. While his book may have been about the Holocaust, the words resonate just as much in today’s world.

And if you haven’t read Night, make that your first New Year’s Resolution.

“I swore never to be silent whenever and wherever human beings endure suffering and humiliation. We must take sides. Neutrality helps the oppressor, never the victim. Silence encourages the tormentor, never the tormented. Sometimes we must interfere. When human lives are endangered, when human dignity is in jeopardy, national borders and sensitivities become irrelevant. Wherever men and women are persecuted because of their race, religion, or political views, that place must — at that moment — become the center of the universe.

There is so much to be done; there is so much that can be done. One person — a Raoul Wallenberg, an Albert Schweitzer, a Martin Luther King Jr. — one person of integrity can make a difference, a difference of life and death. As long as one dissident is in prison, our freedom will not be true.

As long as one child is hungry, our life will be filled with anguish and shame.

What all these victims need above all is to know that they are not alone; that we are not forgetting them, that when their voices are stifled we shall lend them ours; that while their freedom depends on ours, the quality of our freedom depends on theirs.

Our lives no longer belong to us alone; they belong to all those who need us desperately.” 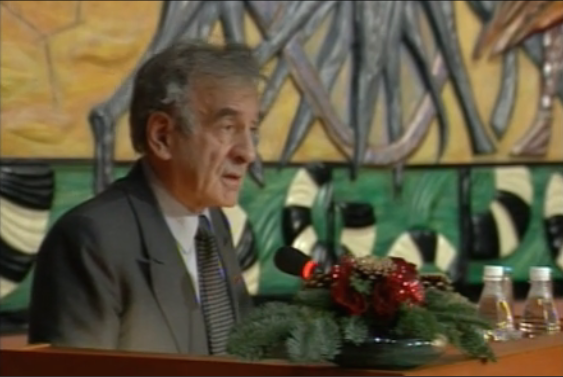 Elie Wiesel accepting his Nobel Peace Prize. Click the photo to watch a video of his full speech at the Nobel Prize website.