For today’s Good News Wednesday, I would like to share a wonderful email that I recently received from Avdesh Bhardwaj, an Assistant Professor in Delhi. This email made my entire week:

It was not more than a coincidence that I met Mr. Damodar Sahoo, more fondly known as “PAPA” on a train journey from Orissa to New Delhi. The beetle paan-chewing, friendly Papa caught my attention soon after boarding the train as he was reading a book whose title made me think. Soon enough the man had tears in his eyes. I asked him if he was in some sort of discomfort or ill. The enquiry made him smile and he asked me to read a few lines of the book he was reading. The concerned page was well marked. As I read the description of a paan-chewing saint I could gauge his emotions. The Weight of Silence had actually become The Weight of Emotions. As he was having some problems reading at night time I offered him to read it for him. I came to know about your work, Miracle Foundation, Caroline, and Papa. But the Journey ended soon and I could not finish the book. That is a regret.

Papa has sent his good wishes and blessings to all and specially to you. This truly was the most rewarding journey for me. I wish you all success and happiness in life.

Papa with his children

Amazing, isn’t it? This man happened to meet my Papa, a main character in The Weight of Silence, on the long train from Orissa to Delhi – and took the trouble to contact me and write about it. I had tears in my eyes reading his email, and we struck up a correspondence. As it turns out, Avdesh was also inspired by the chance encounter with Papa – in 2001, as he was in his final year of college, Avdesh was caught in the massive earthquake in Gujarat, India that registered 8.0 on the richter scale. The entire hostel that he was living in crumbled to the ground, and Avdesh was crushed in the pile of rubble.

For the next three years he was hospitalized, receiving medical treatment and trying to learn how to walk again. The doctors said he would be lucky to ever walk again – but he did; in his words, “Today I not only walk but dance, play and travel a lot.” He was extremely lucky, for most of his friends and teachers at the site died in the earthquake.

Avdesh went on to tell me that the people who rescued him from the rubble were “economically poor construction workers who we normally don’t pay much attention to.” Avdesh said:

I promised myself never to lose hope, be positive, smile,, enjoy life and help as many people as can in my life without any inhibitions, especially the less fortunate. But somehow in stabilizing my academic and professional career, undertaking research and fulfilling family commitments, things went out of my mind somewhat. 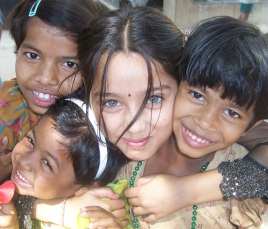 His chance meeting on the train with Papa and coming across my book telling of these amazing children helped remind him – just as they remind me every day. Thank you, Avdesh, for bringing such a smile to my face and reaching out to me. It is, indeed, a small world and I love when the connections grow closer every day.

On another note, now that we are nearing the holidays, I would like to share some meaningful gift ideas. iPods and the latest toys are very nice, but making a real difference in someone’s life? Priceless.

Here are some great gift ideas for the person who has everything – or who really wants to give something:

The Art of Human Kindness

For today’s Good News Wednesday, I would like to share a wonderful story about an artist, a journey, and the incredible organization that came from them. I’m talking about Michael Daube and his amazing story, which I’ve shared before.

In the late 80s, New Jersey-based artist Michael Daube was backpacking around India. In Calcutta, two small children approached him on the street, begging for money. Michael began talking with them, and soon the children had invited him to accompany them to the place where they had lunch every day.

Michael and the children arrived at a Catholic charity where dozens of children were awaiting their lunch. Michael asked one of the sisters if he could volunteer or help in some way; the nun told him that he better talk to the sister in charge, and led him to another room to wait.

Into the room walked Mother Theresa – whom Michael had never even heard of at the time.

Flash-forward a few years: Michael is back in New Jersey working as an artist, and still thinking about those kids in India. One day he goes dumpster diving for sculpture materials, when he discovers amongst the trash a drawing by legendary British artist David Hockney. This was the watershed moment he had been waiting for. Michael sold the drawing, and in 1997, used the money — along with a lot of travel, determination, inspiration and hard work — to found Citta, an organization dedicated to boost the education, health care and economic prospects of some of the most economically disadvantaged people in the world. Citta currently operates hospitals, schools, orphanages and women’s centers in India, Nepal and Mexico.

Today, Michael and Citta have a great new venture to raise funds and awareness, and increase the work being done by Citta. Tonic, a website focused on the good that happens each day in neighborhoods all around the world, is hoping to spread Citta’s message of help and hope through a new partnership. Sūtra Scarves are hand-made, beautiful cashmere scarves that feature words of wisdom, strength and inspiration. Each piece includes embroidered Sanskrit translations of words chosen by creative powerhouses including Natalie Merchant, David Bowie, Queen Latifah and Scarlett Johansson  — making them as meaningful as they are luxurious.

The scarves are works of art unto themselves and are knit and embroidered by the artisans at the Women’s Center in Orissa, India, providing the means for locals to empower and help themselves. Exclusively on Tonic, a portion of the proceeds from each scarf goes to help make the next Citta dream a reality.The goal is to raise funds toward the $65,000 needed for Citta to build a girls’ school in Jaisalmir, India. Read the full article on Tonic here.

So, just in time for your holiday shopping – buy an amazing, one-of-a-kind cashmere scarf – and feel great about helping to empower women and children at the same time. Namaste!

Today’s Good News Wednesday segment is about a very simple, easy way that you can help create positive change for the future of these children.

Raju, an Akanksha student I interviewed

Akanksha is a non-profit organization in India that is dedicated to education of the poorest and most vulnerable children. They go into the slums and streets to bring a better education to children who would otherwise get left behind.

I visited Akanksha in Mumbai, while interviewing and writing the book, and I feature them in Chapter 6 of The Weight of Silence. I also wrote a story about their wonderful work, and some of the Akanksha students that I talked to, on this blog.

Now, Scene East has partnered with Akanksha to bring some beautiful holiday cards to the market, with proceeds benefiting Akanksha’s work and students. Scene East’s business is designed to share photos of magical places, while raising money to benefit worthy causes. When you Shop with Scene East for holiday cards, your money will go toward furthering the education of children in need – while providing you with some amazing, gorgeous holiday cards that are designed and drawn by the kids!

Over the past 20 years, Akanksha has expanded from 15 children in one center to over 3.500 children in 57 centers in Mumbai and Pune, with an additional 2100 children in 6 schools. Help support their work by purchasing your Diwali, Christmas, Chanukah, New Years and Birthday cards through Scene East!