Shelley on NPR and other fun stuff!

Last week, Austin’s KUT Radio featured an interview with me on the August 17 “Morning Edition” show. You can click here to listen to the 5-minute interview – the page also features some beautiful photos of the children.

In addition, a number of NPR affiliate stations around the country picked up the story and broadcast it as well!

You may be interested in reading a couple of articles I have contributed to other websites in the past week:

India Chose Me – on Troubadour 21, a literary site, about how India wrapped itself around me and refused to let go. I fell in love with the country and her children, and they will always be a part of me.

Slumdog Millionaire: The Story Hollywood Left Behind – on Your Life is a Trip, a terrific travel website whose founders believe that there is no division between your travels, your life and your soul; and who would like to inspire people to be a traveler rather than a tourist in their own life. I wrote this story for their new Opinions section, about the everyday reality of millions of kids such as the fairytale movie portrays. 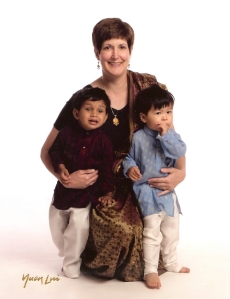 On another note, I received a very touching email from a new fan. Kimberly sent me a message saying that she related to my book because she had adopted her son from an orphanage in India in 2005. I would like to share a bit of Kimberly’s story with you:

“Today, Ian Harshad is 7 years old and is a delightful and clever boy.  He is still in the process of recovering from severe malnutrition and maternal deprivation and has years of therapy ahead.  He bears many emotional and physical scars from his first three years and worries almost daily about his birth parents.  His mother was a teenager who we pray is still alive and thriving.  Thank you for your great effort in researching and writing on this difficult subject.  I hope you will continue to follow the story of the children you met in India and provide your readership with a follow-up on their lives.”

Thank you, Kimberly, for sharing your story with me, and my other readers. You and your beautiful son are an inspiration!

The past few days I have spent in Rourkela, in Orissa in northeastern India. I’ve been with the Miracle Foundation volunteer group working in the orphanage that Dr. Manjeet Pardesi opened a few years ago. The 100-plus children who live there are doing well – healthy, happy, beautiful, doing mostly good in school – we had a blast with them!

The Rourkela home is mostly younger children – here the program for unwed mothers was started, and so there are a lot of babies and toddlers. The rest of the children are pretty much between 4 and 10 years old, with only a couple of older children like Kalpana. The house mothers are great – well trained, and the children absolutely adore them. These women have one of the toughest jobs – they are on 24/7. They live, eat, sleep and breathe with these children with virtually no off time. They are absolutely amazing.

Most of the children here at Rourkela are sponsored, but there are a few who need sponsors. This is important, because Caroline and Manjeet cannot take more children in until all the current children are sponsored, with their needs being met and the financial ability to care for their needs. This was demonstrated to me vividly on Monday afternoon. I saw Manjeet sitting by the front gate of the compound with a woman holding a baby, and several men. Later, at lunch, we asked Manjeet who it was.

He told us it was a woman who had heard of the home and traveled a very long way, from neighboring Jakharnd state. Her baby was three months old, and she was dying. She felt she had only months to live, and she wanted to bring her baby to the home and give it to Manjeet. However, Manjeet had no ability to take the baby in – again, until they can care and provide for the children already living there, they cannot take more in. So, the best Manjeet could do was give her a hundred rupees to get something to eat and travel back from where she’d come – a day’s journey.

I had a lot of great moments with these beautiful children, but one of the best might have been with a four year old girl named Mary. She was very quiet, but attached herself to me and was all over me Monday, in my lap each time I sat down and raising her arms to be picked up every time I walked near her. I only found out later, from Manjeet, that Mary had once been blind. Danny Connor, a volunteer along with me on this trip, has a sister named Leslie who had also been with the two of us on a previous visit two years ago. Leslie told her circle of friends about Mary, and one of them paid for her and a caretaker to travel to Delhi and for her to have an operation that fixed her problem and allowed her to see. She now has 20/20 vision!

And the most beautiful eyes. Late in the afternoon, in a rare quiet moment, I was sitting on a mat in the toddler room and Mary crawled into my lap. For a few moments, she just stared up into my eyes while I looked back into hers. She reached up and silently stroked my hair, pushing my bangs back out of my eyes and then tapping my cheek gently, all the while just gazing at me with her huge brown eyes. It seems simple, but it was a magical moment – and I only knew how much so the next day, when Manjeet told me the story about how, not so long ago, those eyes wouldn’t have even seen me.

Amazing. Time and again, I am humbled by the things people have done, and the changes wrought in the lives of both these children and the people who are involved with them.

Visit the Miracle Foundation website and learn how you can sponsor a child today!