Buy the book by clicking the photo!

Hi, I’m Shelley. Many people ask how I got involved in this work and writing The Weight of Silence. So I created this page to give a little bit of background. You can also download my Press Kit.

I am a freelance writer based in Austin, Texas; but I vagabond in any part of the world whenever I get a chance. I have written for National Geographic, CNN, InfoChange India, and travel guidebooks for Globe Pequot Press, among others. I am the Sustainable Travel columnist at The Examiner. Besides The Weight of Silence, I have authored or contributed to 5 other books.

My mantra is “travel with a purpose.”

You can visit my journalist website and portfolio at www.shelleyseale.com.

I have been involved in nonprofit work and social activism almost all my life – particularly around child advocacy. When I was a young teenager my mother began fostering babies for the Edna Gladney Home in Fort Worth, and through the years we were a foster home to over 50 children. My sister, Katie, was adopted during that time – as she says, she’s always known she was special! So at a young age I was aware of child rights and advocacy issues. It must run in the family because both of my sisters, Amy and Katie, work at nonprofit agencies working with children and families. 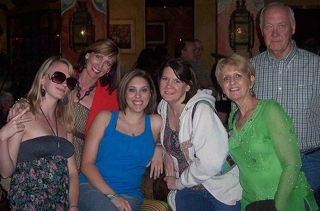 As an adult I began doing a lot of volunteer work here in Texas, with abused and neglected children. I participated in a mentoring program for at-risk teens for several years, and worked with Child Protective Services. In Austin I have been a Guardian Ad Litem through CASA for almost 5 years, in which I act as a court-appointed advocate for children who have been removed from their homes due to abuse or neglect, and have been involved with The Heart Gallery to find forever families for such children.

Then in 2004 I read a story in Tribeza magazine about Caroline Boudreaux’s incredible journey that became The Miracle Foundation. After a trip to India caused Caroline to come face to face with hundreds of children living in hunger and filth in an orphanage, she turned her life upside-down and started the foundation that today supports five orphanages in India. I began sponsoring a child, and in March 2005 traveled with Caroline to India for the first time, to work in the orphanage and meet the children. As trite as it sounds, the experience changed me, too.

I soon came to realize that most of the children living in the homes were not orphaned due to death, but due to poverty. India is home to more than 25 million children living without parental care, and three million more are added each year.* As I learned more about the complex, intertwining issues that make children vulnerable to orphanhood, the sex trade, child labor, HIV, or a life on the streets, I began to come up with the idea for this book. My simple goal is to help give a voice to these invisible children. View my 4-minute QuickTime movie featuring some of the beautiful children I’ve written about.

In August 2006 I was accepted into a residency at the Julia & David White Artist Colony in Costa Rica, where I began writing the book. I worked on the book for the next three years, involving hundreds of hours of research and four trips to India, where I traveled all over the country meeting children and interviewing social workers, doctors, orphanage directors and others who are working to change the plight of these children. I also took my teenage daughter, Chandler, with me in 2006.

My daughter, Chandler, in India March 2006

In July 2007 I spent a month at the Prague Summer Writers Program and the prestigious Gribner Nonfiction Manuscript Workshop, where I worked with a group of other authors, editors and publishers to edit and polish the manuscript. I am thankful to all of them for helping give this finished book its direction and voice.

This topic, and these children, are very near and dear to my heart. For those who ask, why India? my simple answer is, why not? I find most people who ask this question are really asking, why don’t you do something here at home instead of traveling halfway around the world? There are plenty of children here who are suffering and need help. And I do – I donate thousands of hours and dollars each year to children in need right here at home.

But besides that, why India? Because I believe that every life, no matter where it’s lived, has equal value. Because extreme poverty in India is not the same as poverty in the United States. Because there are very little if any safety nets for these children who fall through the cracks. Because the AIDS crisis in South Asia is reaching epidemic proportions and threatens millions of children. Don’t get me wrong – we have vast problems in my home country, including poverty and racism and inequality and child abuse. But millions of children in the U.S. aren’t generally threatened by malaria and tuberculosis, missing out on their entire educations, or trafficked into brothels and factories of inhuman conditions. Today there exists, for the first time in history, the real possibility of ending extreme poverty in developing countries.

And quite simply, because those 25 million children exist.

Purchase your copy of The Weight of Silence today!