I never expected to be in India. And without a doubt, I never thought once I had been I would return, again and again.

It wasn’t the exotic beauty that drew me back. It wasn’t the warmth of the people, their gentle and inquisitive nature, their open hospitality. It wasn’t the storied, ancient history of the country or its rich and varied culture. It was not the colors or the spices or the sounds or the spirituality of the place. India is all of these things, to be sure, and I have grown to love them all. But they were not what seeped into my being and pulled me close, becoming a part of me that I missed with a strange emptiness when I left.

It was the children.

They are everywhere. They fill the railway stations, the cities, the shanty villages. Some scrounge through trash for newspapers, rags or anything they can sell at traffic intersections. Others, often as young as two or three years old, beg. Many are homeless, overflowing the orphanages and other institutional homes to live on the streets. I had no way of knowing just how much they would change my life.

From the moment I arrived to volunteer at a Miracle Foundation orphanage, I found India to be everything I had imagined – only more so. More colors and smells, more noises and people, more everything. It was an assault on all the senses at once. There seemed no still or quiet space. Instead there were throngs of people everywhere, living and working and sleeping; hundreds of street vendors lined every available inch of sidewalk, while mangy dogs and cows nosed at piles of trash around them.

Rickshaw drivers pedaled through traffic alongside schoolgirls with their braided hair and backpacks. The smell of curry and incense hung thick in the air along with soft chanting from nearby temples. The dusty roads peppered with potholes were filled with a constant stream of buses, bicycles, rickshaws, cars and cows and rising over it all was the constant, blaring beep-beep of the horns. It was the most alive place I had ever been. India is too big to describe adequately, too big perhaps to absorb in a single lifetime. The country simply wrapped itself around me and refused to let go.

And in the children this beauty seemed to come alive, almost making me believe it was a living entity I could capture in my hands. They are what bring me back to India over and over – to volunteer at the orphanage that was home to over a hundred kids. When I arrived for the first time in 2005, I had expected it to be a sad place, an emotionally wrenching experience. But those expectations had been turned on their head. Yes, there are stories behind each of the children – many of them painful and tragic. Stories of death, abandonment, abuse, poverty. They all have a past.

Yet their hope and resilience have amazed me time and time again; the ability of their spirits to overcome crippling challenges inspire me. Even in the most deprived circumstances they are still kids – they laugh and play, perhaps far less frequently than others; they develop strong bonds and relationships to create family where none exists; and most of all they have an enormous amount of love to give – for nothing more than just showing up.

As I sat in the courtyard on my last night with them, I felt everything I loved about the place converge together inside me in that moment.

The smell of the chai, its cardamom and ginger and cinnamon drifting up to my nose, the sound of bare feet slapping against the ground as children ran. The soft breeze that whispered through the trees and caressed my skin while the fading sun bathed everything in an orange and pink light. The colorful painted elephants who seemed to watch over us from their places on the surrounding walls. The vibrant blue and yellow and purple sarees of the house mothers as they passed by and the bangles on their wrists that clinked melodically against each other while they worked. The occasional monkey above us in the trees, or a calf or dog that wandered into the courtyard before being shooed away by the staff. Most of all, the familiar faces around me that made me feel I had come home. 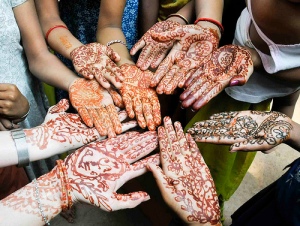 The very existence of these children had forever altered both the person I was and my view of the world. In some ways I felt more familiar to myself here, like I was now the person I had been brought to India to become. I had arrived, that first time two years before, not really knowing what to expect. I had not come to India to change anything about it; instead, the country and its people had worked a transformational change in me. They had allowed me into the real heart of the place and by doing so spared me from viewing it with the eyes of an outsider.

India simply cannot be approached with anything but fully open arms and a willing heart. And it will embrace you in return with an exhilarated spirit, splendor and enchantment, nonstop vitality, amazing people and their daily parade of life – struggles, joys and triumphs – that passes by every moment. I was lucky enough to have been given this incredible treasure by these children and the people of India.

Millions of children in India share a similar story. A life of poverty with no family and little hope. The Miracle Foundation provides these orphans with food, water, clothing, shelter, education, medical care, love, and most of all – hope.

Shelley is a wanderer and student of the world, yoga chick, voracious reader and dog lover. She pounds the keyboard as a freelance writer, author and publication designer, based in Austin, Texas when she isn't traipsing around the globe. Shelley has written for National Geographic, USA Today, The Guardian, The Week, Fodor's, The Telegraph and Texas Monthly, among others. Shelley has performed a catch on the flying trapeze, boarded down a live volcano, and was once robbed by a monkey in India. But she doesn’t know how to whistle.
View all posts by Shelley Seale »